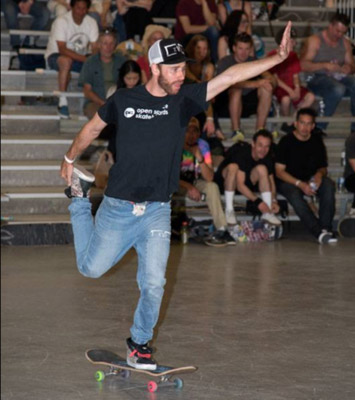 Originally from Lexington Kentucky, Sto grew up in the horse country where his father was the manager of a horse breeding farm. The local skateboard park was miles away so he made use of what he had and practiced freestyle in the basement of his family’s home. After graduating from Northern Kentucky University, with a BA in Theatre, Sto decided to move to LA in 2011 to pursue a career in acting and entertaining. He landed a roll playing the Green Goblin in the Marvel Universe Live Stunt Show that played over 100 shows across America.

Besides skating Sto loves snowboarding, comedy and is an avid Karaoke singer and has even competed in a few Karaoke contests. With his love of singing he has also been auditioning for several rolls in musicals.

An all-round skater, Sto skates everything and has won several street-style events including the Cosmic Invasion Street Contest, in Lexington, where he won both 1st place and Best Trick. His mentors are Ian Miller and Phil Image who have helped to form his skating style.

He has been thinking about competing at the World Round-Up for years, but could never find the time. But this year his new room mate, Mike Osterman, made sure that he made the time. He really wants to skate with his friends and also meet more skaters from around the world.

The World Round Up: http://www.theworldroundup.com/sto-strouss/