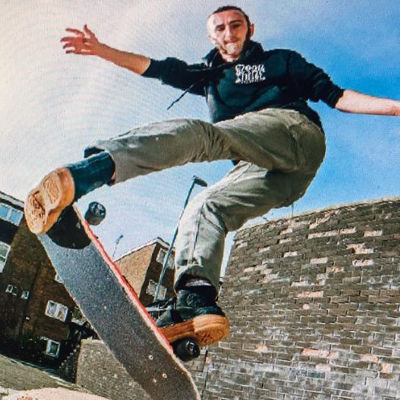 I live in a small town in Northern England. Oh, and it’s Grim Up North…

There’s not much available for skaters where I live. We had a skatepark, but it consisted of a few obstacles spotted around a huge area of concrete. I learned how to utilize the park, purely by skating the flat ground available. I suppose I was drawn to freestyle for its versatility and because I love taking a different approach and diving a bit further into the old school type of skating. I soon found that possibilities for new tricks were endless, and that freestyle offered me a constant means of self progression, and a cathartic means of expressing myself, which I had never previously found. It’s helped me overcome many personal issues, purely by offering me the reassurance that it’s okay to express myself. Its fine to be angry, anxious or frustrated, because I know I have a means to cast out those daily frustrations, purely by going for a skate. Strange how something so simple and lacking in pretence can altogether make someone feel more human.

I entered my first competitions in 2015, and went straight in as pro, big mistake. It was terrifying, and I landed maybe one trick. I’ve always had an unhealthy relationship with competition, I’m naturally a pretty nervous guy, although you might not think that from the outset. I’m looking forward to the going to the World Round-Up again to experience, and meet up with other like minded individuals who soon become friends. There’s always a great community feel to the competition and I thrive on that kind of environment. It’s always great to hang out with guys you haven’t seen in a year or more and just soak up the experience. That, and the kid’s rodeo thing they do where they sit them on a sheep is the highlight of my year.

I graduated from Art College, still have no idea how, found a job that I didn’t really care for, so I left it to coach skateboarding full time for Sk8 Safe. It’s incredibly rewarding. To offer young people an alternative to traditional sports, where they can develop as an individual at their own pace, and take part in a pastime which becomes a long standing and positive influence in their life, is great. Even if one kid in a class of 20 takes up skateboarding, and gains as much from it as I did, I go home happy and fulfilled. Because I know they do too. I love drawing tattoos, getting tattoos and all manner of other poor life choices. When I’m not skating I love to play my guitar, drums, of Bass guitar.

My skating style is characterized by speed, aggression, and most importantly, a sense of fun. You will recognize me as the guy with the sideburns. Great big sideburns.

The World Round Up: http://www.theworldroundup.com/denham-hill/