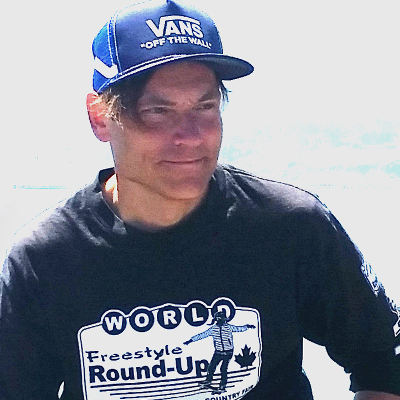 I am often asked how I got started in skateboarding. Well, while I was walking through the town of Dortmund I came across a traveling Road Show featuring a skateboarder and two BMX riders. While I was watching the skateboarder perform in front of that crowd, something just clicked and I knew what I had to do. The very next day I went and bought a skateboard, and that is how it all started 33 years ago. One of the highlights of my skating career was representing Germany at the TransWorld Skateboarding Championships that took place at EXPO 86 in Vancouver, Canada. Two years later after competing in over 35 contests I decided to turn professional. I now make a my living off of skateboarding and have done so for several years. I have been very lucky to have traveled the world competing in many contest including the last two years at the BIG Rio Freestyle Contest in Rio de Janeiro, Brazil. Talk about LUCK I always wear my contest wrist bands for good luck.

Something tells me it’s way more than just those wrist bands that makes a winner. In the past 34 years, Guenter has competed in over 100 contest, 64 of which he has placed 1st including the 2015 and 2013 World Freestyle Round-Up’S. There are just too many contest placings to list here, but you can read his full story at: www.skateboardbusiness.de