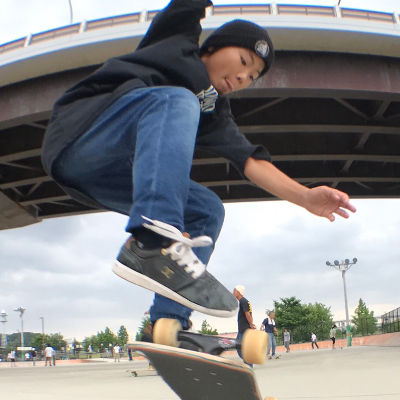 When Ikkei was just 7 years old, pro skateboarder, Toshiaki Fujii took him under his wing and started teaching him the basics of freestyle. Learning freestyle tricks was not always easy but Ikkei found it was so much fun that he kept at it. He try’s to practice from 30 minutes to an hour each day putting in about 4 hours on the weekends.

A 5th grade student at Kashiwai Elementary School, Ikkei’s favourite subjects are Science and History. When he is not skating and helping to take care of his younger brother, he loves to play Dragon Ball Xenoverse on his Playstation 4. We asked him why he likes freestyle and he said, “Because I can express myself”. Right now his mentor Toshiaki has been teaching him the 720 Shove-It which he wants to perfect before he heads off to Canada to compete at the World Round-Up. His good friend Yuta Fujii told him about a freestyle contest in Canada, that he and his father were going to and asked him if he wanted to come too. Ikkei’s Dad said yes so they will both be joining Yuta and his father on the trip. What a great experience for these two 11 years olds to be able to come to Canada and compete at the world championships.

The World Round Up: http://www.theworldroundup.com/ikkei-nagao/