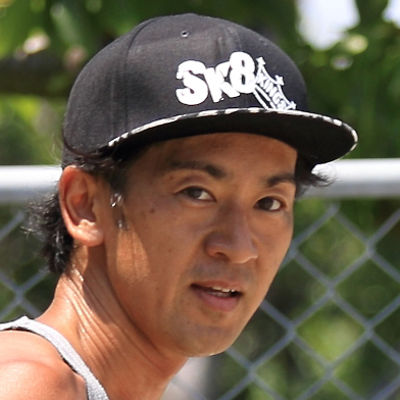 When I was about 15 years old, my younger brother Toshiaki bought a toy skateboard that we would take turns skating on. Just by chance a freestyle skater saw us and decided to teach us. We enjoyed it so much that we both became very good at it and I even placed 2nd in the very first contest I went into. But then freestyle sorta died in Japan and left a real void for my brother and I. We decided to do something about it so we formed a team called the FScom Freestyle Team in 2012. The team consisted of Toshiaki and myself, Isamu Yamamoto, Kota Sawaki, Yuta Kikuchi, and Seya Nakano. Because we all live in different cities we don’t get to skate together that often but when we do we have a ball. We have several new members on our team who all work hard to spread the news about freestyle skating in Japan. My brother and I also help to organize skateboard contests for the Japan Flatland Skateboard Association.

I graduated from Kansai University in Osaka, Japan and work as an office printer software engineer for Canon Marketing Japan. I am married and have two children, but because of family commitments and work I only get to skate about 4 hours on Saturday and Sunday with my son Yuta. I use to take him with me when I would go skate hoping that he would want to learn from me. In the beginning he wasn’t really that interested, but once he started to have fun you couldn’t keep him off of his skateboard. I love dreaming up tricks and have a lot of ideas, the only problem is as I get older I can’t jump high enough to pull off the new tricks I dream up. I see the future of freestyle, in the hands of young skaters like my son and his friends, who have the flexibility to do those difficult tricks.

Besides skating I also love Magic and Juggling. I use to perform tricks for my family and friends and show off in front of my co-workers after work.

The World Round Up: http://www.theworldroundup.com/masahiro-fujii/

Ian Rivera Runs Through Q&A’s About Music and Life